Connect Legal in August 2017 secured a landmark judgement in the Federal Court of Australia, Putlands v Royans Wagga  in relation to individuals who were actually engaged as contractors, but were in effect employees. Both Linda Husband and Shane Putland from Wagga Wagga were engaged as call centre operators by Royans Truck Repairs from 2005 and 2010 respectively until 2015 on sham contracts, working extensive hours and paid substantially below the Clerks Private Sector Award. The case ran over 7 days finishing in August 2016 with judgement delivered in the favour of the Putlands in August 2017.

Justice Bromwich of the Federal Court,  made various observations in relation to the multi indicia and control tests and Connect Legal were able to secure the Putlands a landmark victory, deeming them employees pursuant to the Fair Work Act 2009 and the Clerks Private Sector Award and recovering outstanding award entitlements.

Pursuant to this landmark decison of the Federal Court, many judgements have referred to the Putland case and many legal firms have provided their observations, but it was through the joint efforts of Linda and Shane Putland, Connect Legal its team of solicitors and barristers that we were able to remedy an injustice and set the record straight.

Since the Putland decisons we have helped many other employees who were engaged on sham contracts and please email and or contact Connect Legal for confidential advise.

Connect Legal in November 2018 achieved another  landmark judgement in Eastman v Shamrock Consultancy P/L  where Ms. Eastman alleged she has been discriminated becasue of her disability pursuant to the Disability Discrimination Act . Ms. Eastman had been working for Allied Couriers through  their subsidiary Shamrock and was dismissed becasue of her physial disability. Ms. Eastman filed an application at the Australian Human Rights Commission and when unsuccessful she then lodged an application at the Federal Circuit Court. Shamrocks oppposed the application on various technical legal grounds , but Connect Legal, its team of solicitors and barristers maintained her claim was not bared by legislation and had reasonbale propsects of success, with which the Honourable Court agreed.

Finally we were able to secure a costs order against Shamrock Consultancy P/L and we say no more, please read the costs judgement.

Please feel free to contact Connect Legal for a confidential discussion when your have experienced discrimination (racial, cultural, disability (both physical and mental) and or sexual harrassment.

Connect Legal in February 2012 also secured a landmark judgement before the Fullbench  of the Industrial Court of NSW, RJ Enterprises v Booth Transport, regarding the interpretation of the General Carriers Contract Determination. Since 1984 NSW owner drivers had an award that safeguarded their industrial rights,  but regrettably it was unclear how it worked in relation to the hourly rate and standing rate. Connect Legal helped three Applicant owner drivers to clearly articulate the workings of the Award and since that date many NSW owner drivers have been paid a fair and sustainable hourly and kilometre rate. 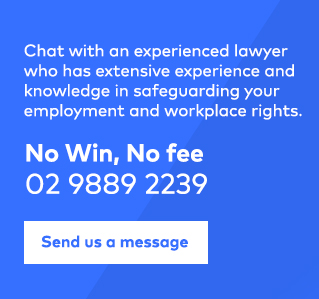 In defending & safeguarding employees in relation to their employment & workplace rights.

Learn how we help our clients

Dear Jake, I was employed for a company for just over one year , suffered a work place injury (lower back whilst lifting) and was dismissed some 4 weeks later whilst still on workers compensation, what claim do you recommend I lodge ? Graham, Albury Wodonga.

Dear Graham, My recommendation will be to consider lodging a General Protection Order claim because it seems you were dismissed because of a workplace right, namely your right to apply and receive workers compensation whilst injured. On occasions employers do become irate when employees are injured and comments like “ a broken leg takes less time to heal than a sore back “ is very common. Nevertheless an Employer’s obligation is only to assist the Employee to lodge a workers compensation claims and ensure a safe return to full time work. In the instance that you have been terminated within two months of the injury this is unfortunate but highlights a complete disregard by your employer of your work place rights.

Dear Jake, I have been working as an owner driver for a large manufacturer for over 10 years and yesterday they told me my services are no longer required ? Brett, Altona, Melbourne.

Dear Brett, your past Principal Contractor has a requirement to provide you minimum notice of the termination of your contract pursuant to the Victorian Owner Drivers and Forestry Contracts Act.

My daughter works for a large National Law Firm, and she has been bullied and victimized for many years. Today a lawyer approached her and said, “ enough is enough go and do something about this they cannot get away with it any longer”. Sue, Brisbane.

Workplace bullying is rampant throughout many Australian workplaces and few people ever speak up about it. Please ask your daughter to maintain a detailed diary of what is occurring and make an appointment to see Connect Legal to discuss her legal avenues of redress.

Dear Richard, I have been working as the General Manager of a registered bowling club and without any notice the Board terminated my contract sighting workplace performance issues, have I been unfairly dismissed ? Jan , Sydney.

Dear Jan, The answer is yes. The Board should have addressed your concerns in writing considering your seniority and length of service and even explained what were your alleged performance shortcomings.

Dear Richard, I have been working for a national retailer and I was dismissed for allegedly not informing management of an alleged communication problem between two junior employees which I had handled effectively ? Nick, Sydney.

The answer is yes. Management should have issued you a warning if they believed you had not handled the problem effectively. However termination was completely inappropriate.

Dear Richard, I have been working as an interstate truck driver with a large transport company, my current position no longer exists, they have offered me a job interstate am I entitled to redundancy : Tim, Wagga Wagga.

Dear Tim, The answer is yes, because your past employer has not offered you suitable alternative work (i.e travelling interstate is definitely not appropriate) and the National Employment Standards and the Road Transport Distribution Award allows for appropriate redundancy pay.

Dear Jake, My husband was sacked from his job because he complained to management on at least three occasions that the truck he was driving had bold tyres and it was unsafe? Sue, Prestons

Dear Sue, Your husband has a right to lodge either an unfair dismissal and or general protection claim. What avenue he decides depends on length of service, whether he worked for a small and or large organization and or the reason he was dismissed.

Dear Jake, I have been working in a warehouse logistics business for about eight months and being female the majority of employees have been very supportive. However my boss, has constantly questioned me about my private life, what I do outside of work, who I hang out with and even making comments about my cultural background. Recently I made a serious written workplace complaint to his boss and attended various meetings with the senior manager and the owner of the company. The owner said, “ your boss does it because of his admiration for you and wanting to help you”. I explained “ what he did was way beyond his employment obligation and he constantly made my work atmosphere unpleasant and put me down infront of staff “ . Unfortunately nothing was resolved and the owner said,” we will sort something out “. Regrettably after two weeks of making the complaint I was dismissed on the grounds of redundancy. What can I do, Sarah, Gosford.

Dear Sarah, This may be a classic case of workplace bullying , your termination seems intrinsically linked to your workplace complaint and namely the Employer did not provide a safe workplace. Unfortunately you will be barred from lodging an unfair dismissal claim because of the so called “ genuine redundancy “. Please have no hesitation in lodging a General Protection Order Claim , and Connect Legal can assist by preparing your application and submissions. Please also note you have 21 days to lodge your General Protection Claim from the date of termination.